These Supreme Court, presidential and congressional ideal points extend the ideology estimates in Bailey (2013, 2007) to cover years 1950 to 2020.  They are comparable over time and can be directly compared across institutions.

The estimates achieve comparability by incorporating the following bridging and other observations.

If you use the data, please use the following citations:

If you spot errors or anomalies, have questions, have observations of inter-institutional position taking you would like to suggest or would like your research included in the applications listed below, please contact me at Michael.Bailey@georgetown.edu. 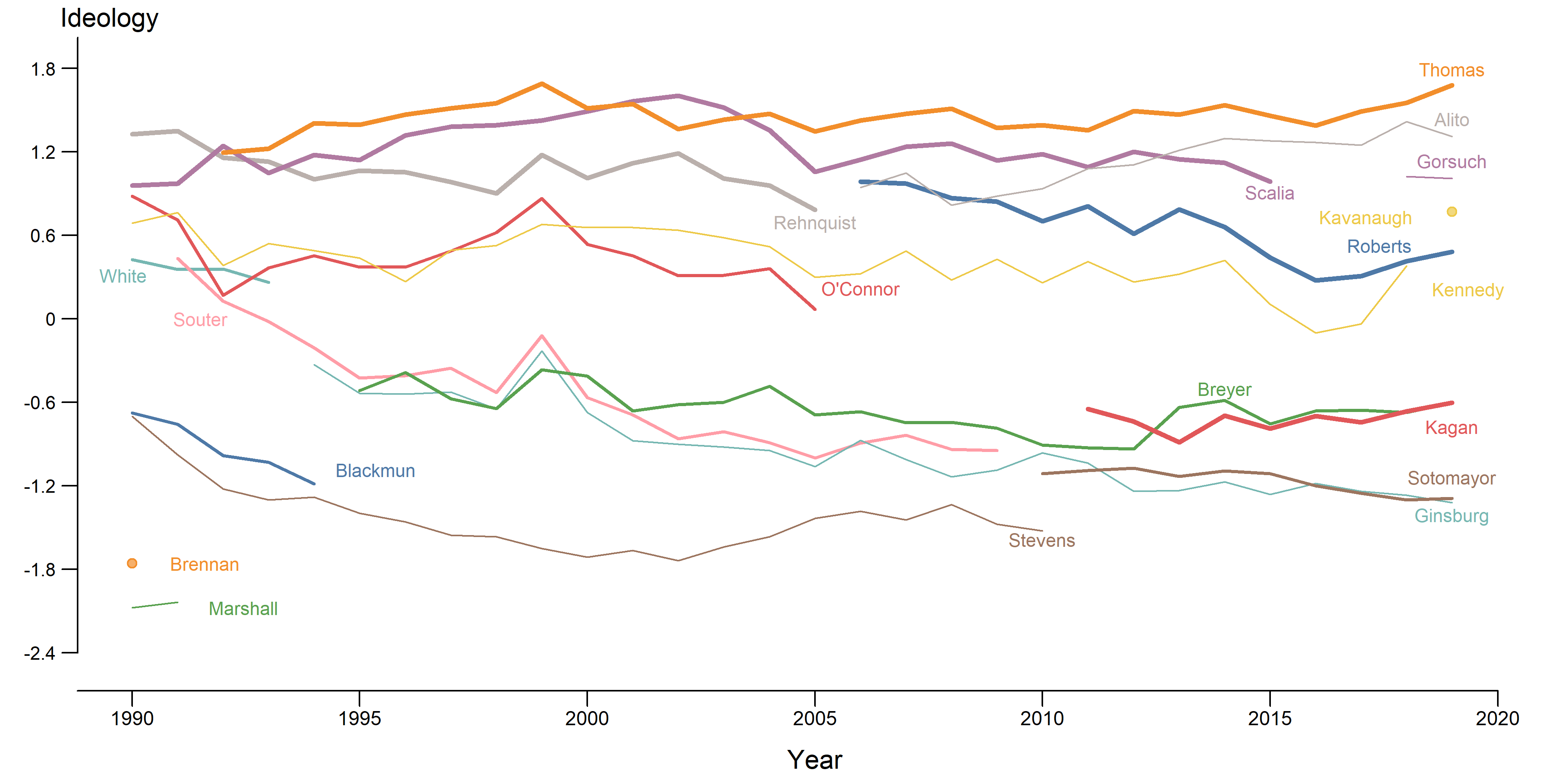 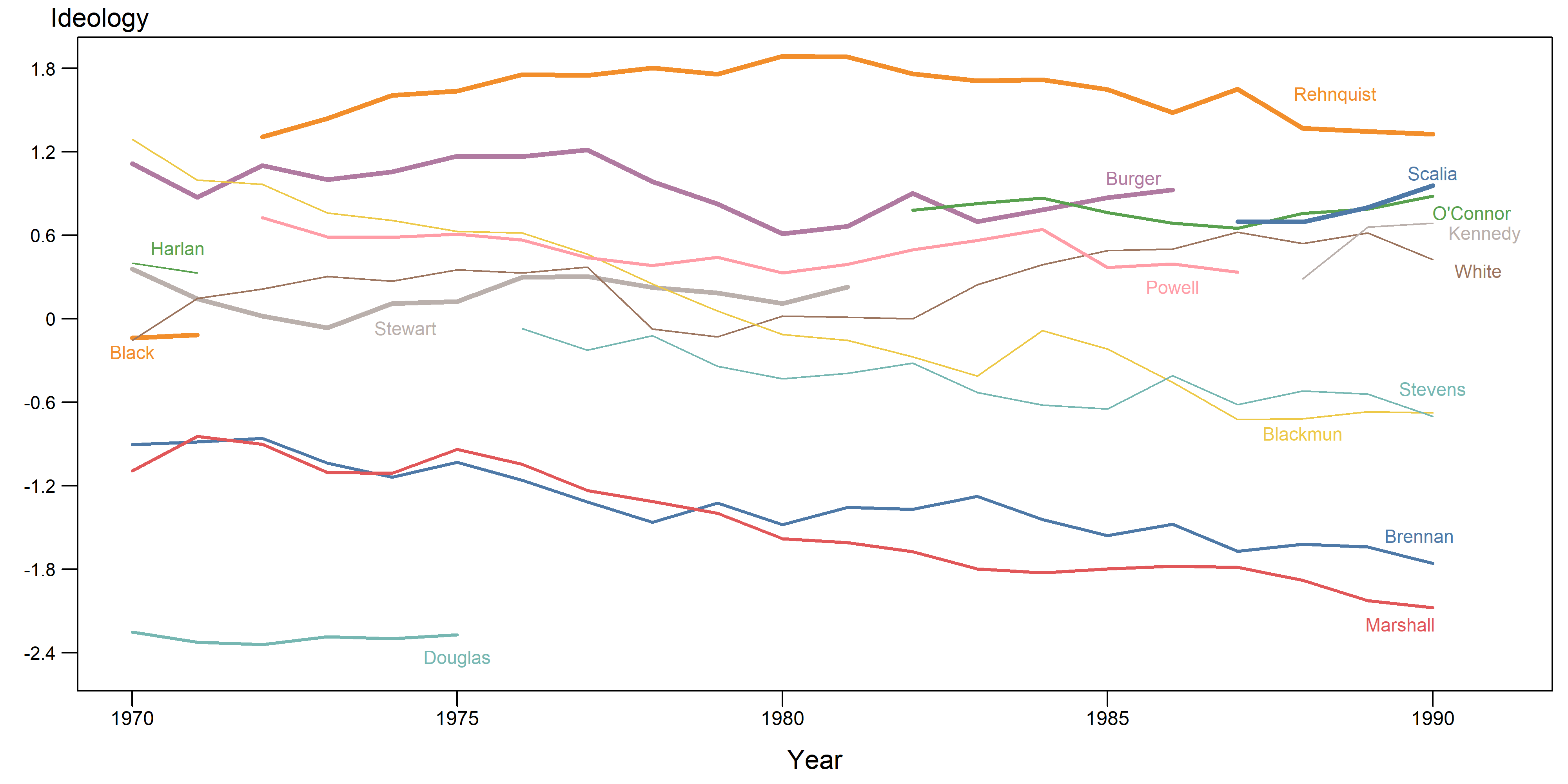 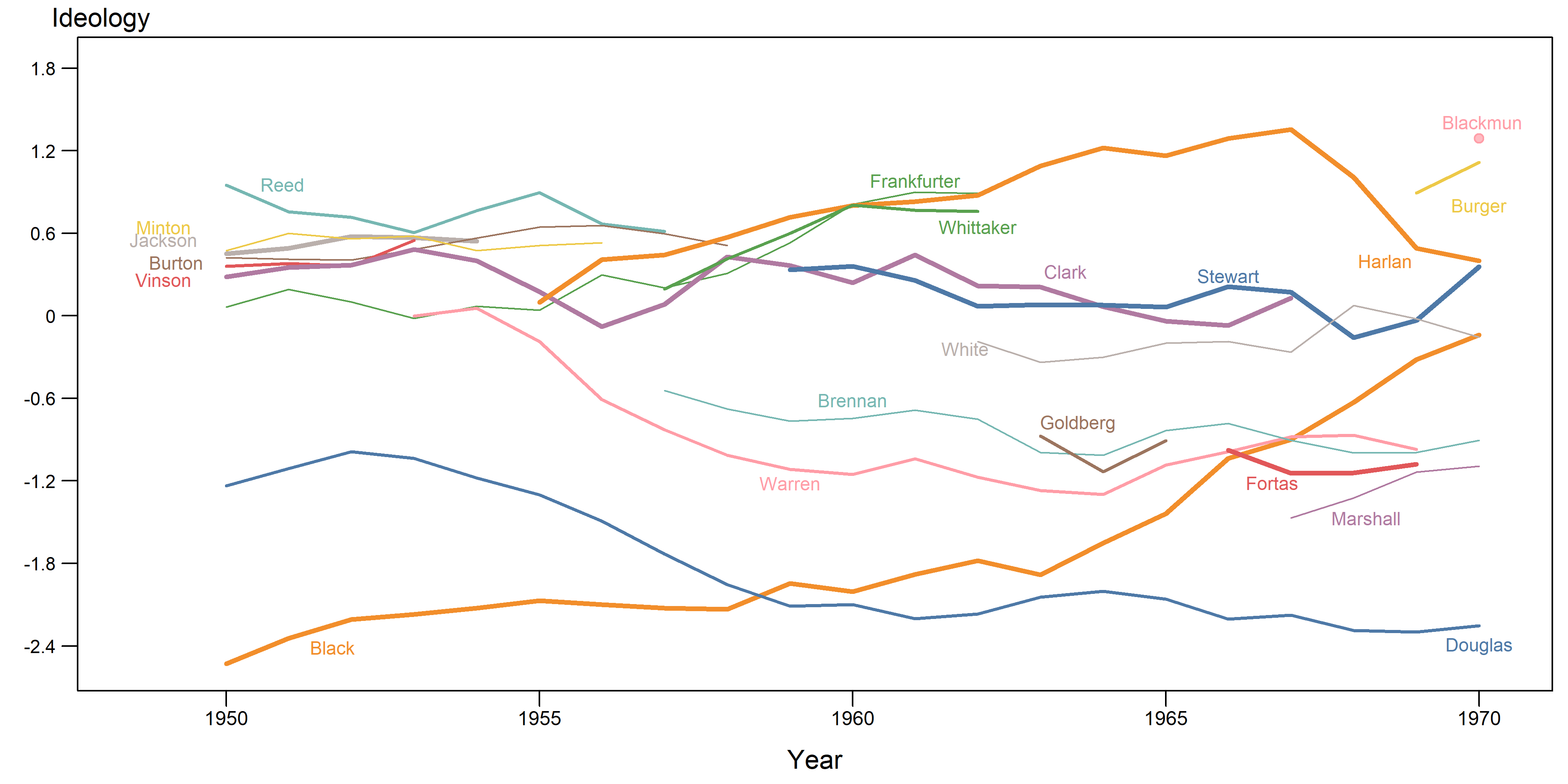 How do these scores differ from Martin and Quinn Scores?

The Bridge Ideal Points for justices correlate reasonably highly with Martin and Quinn scores and often produce similar conclusions when used in analyses.

There are two differences, however.  First, Bridge Ideal Points are designed to be intertemporally comparable. Martin and Quinn scores assume the ideological cutpoints of Supreme Court cases are drawn from a common distribution across years, which makes them less comparable across time when the case load changes.  For example, the figure below (from Bailey 2013) shows that Martin and Quinn scores in the early 1970s suggest the court moved dramatically to the right, reaching a conservative peak around the time it legalized abortion and banned the death penalty.  The Bridge Ideal Points suggest that while the Court did move to the right, it was still relatively liberal but voting on a caseload that was quite liberal. 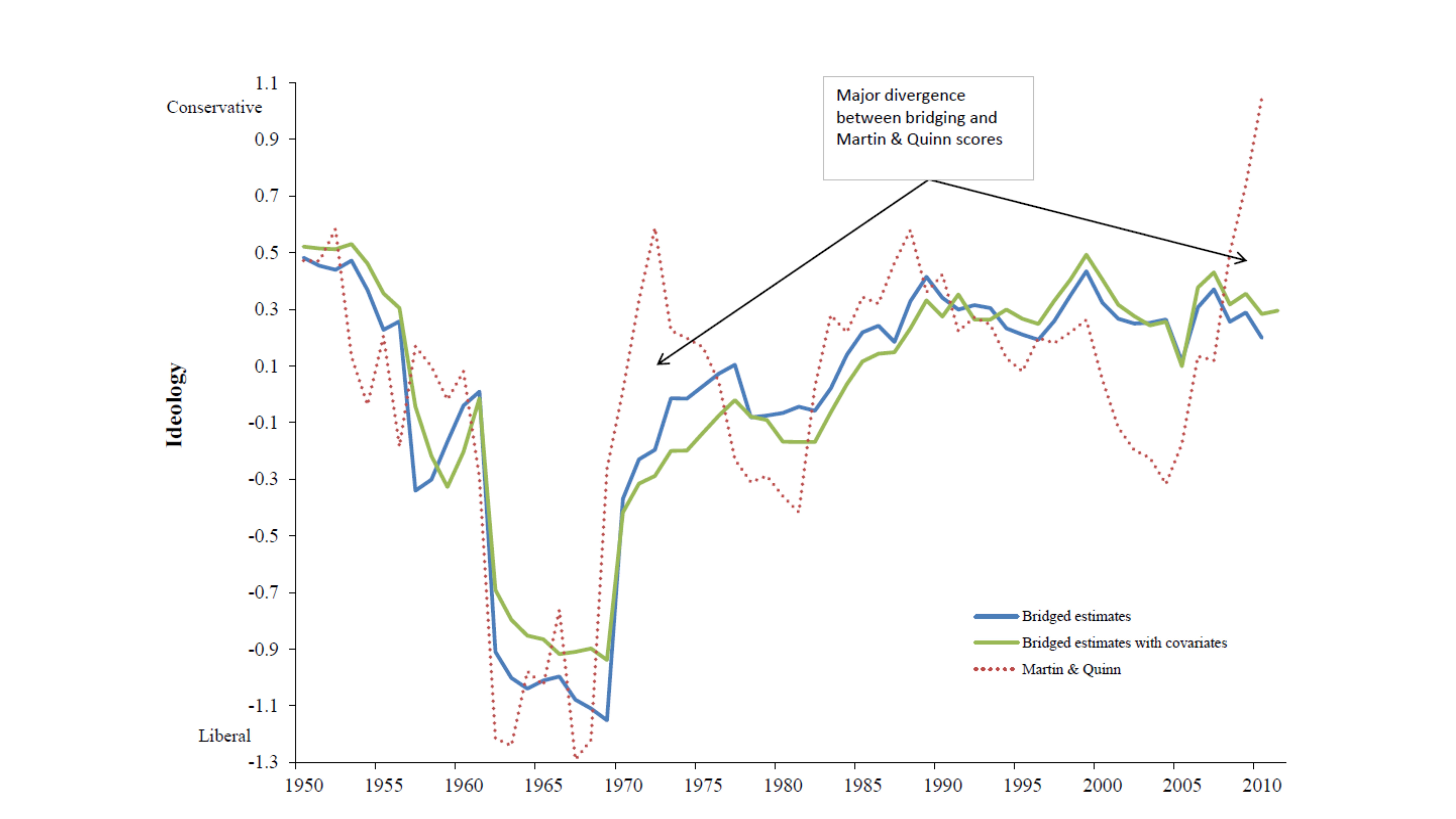 How do these scores relate to Nominate?

Nominate scores are widely used to measure congressional ideology.  Depending on the time period, voting in Congress is best explained by one or two dimensions.

A major challenge when studying judicial politics is that neither of the two Nominate dimensions characterizes judicially-relevant political preferences in the post-war period.

In the 1950 to 1980 period, congressional politics were two dimensional: the first dimension largely reflected party loyalty while the second dimension reflected divides over race (and, to a lesser extent, crime and culture). First dimension Nominate scores in this period do not at all reflect political divides on race and related topics.  Nominate second dimension ideology scores reflect judicially relevant politics from 1950 to 1980, but then become much less useful after 1980 or so.

The figure below (from Bailey 2021) illustrates the challenges of using Nominate for judicial politics by plotting Nominate ideal points for selected senators.  The clearest issue is that segregationists such as Eastland and Russell are moderate on the first dimension; it is simply untenable to view them as moderates on topics like race, crime and culture that dominated the court’s docket in the 1960s. 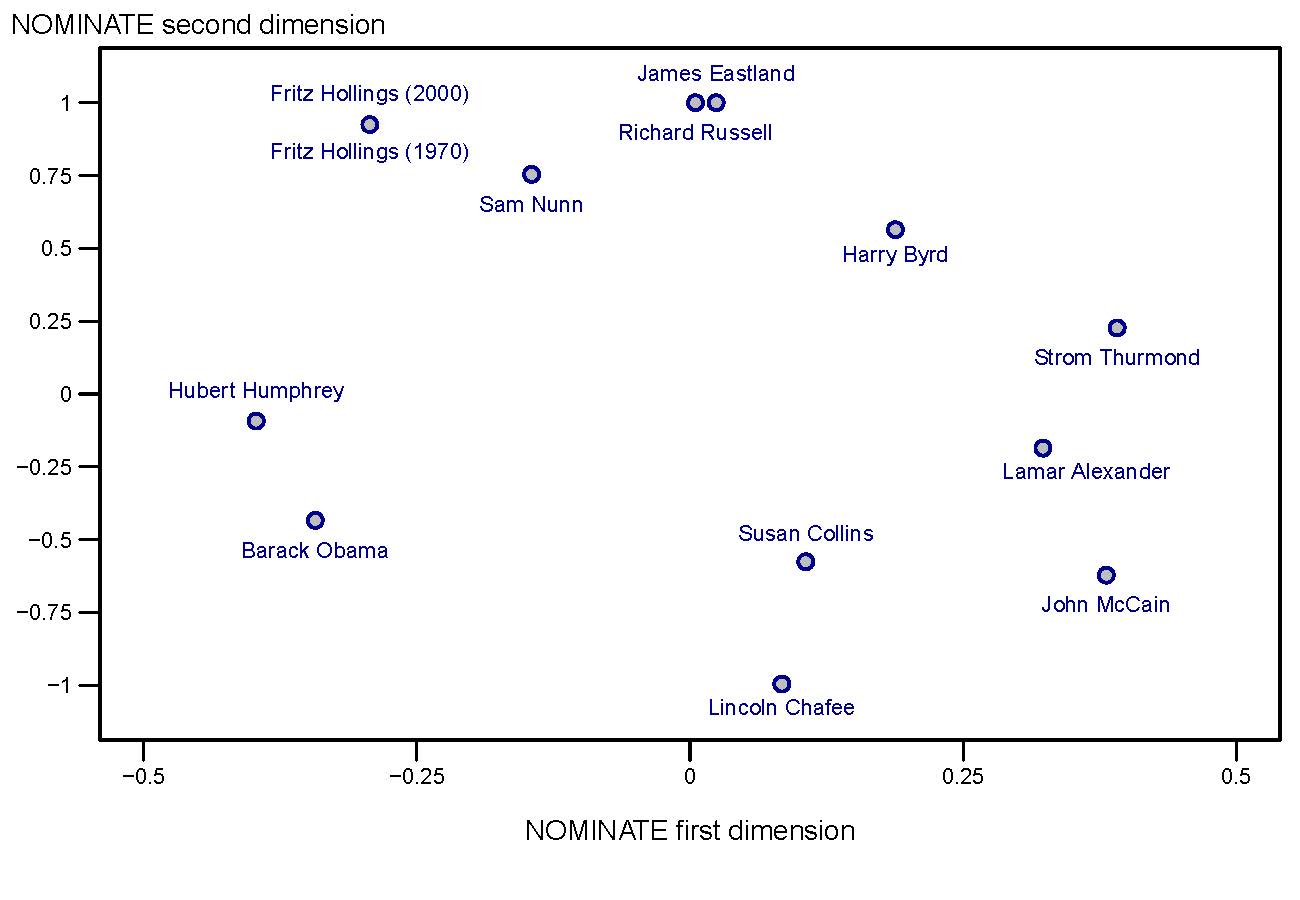 Using the second dimension creates a different – and almost opposite – set of issues.  The Nominate second-dimension preferences of moderate Democrats like Sam Nunn and Fritz Hollings look like the segregationist senators.  And the second-dimension Nominate scores for Chafee and Collins are very liberal, more liberal than Hubert Humphrey and Barack Obama.  McCain would be to the left of Obama when using the second dimension, as unbelievable as the implication that he was to the right of the segregationists on the first dimension. 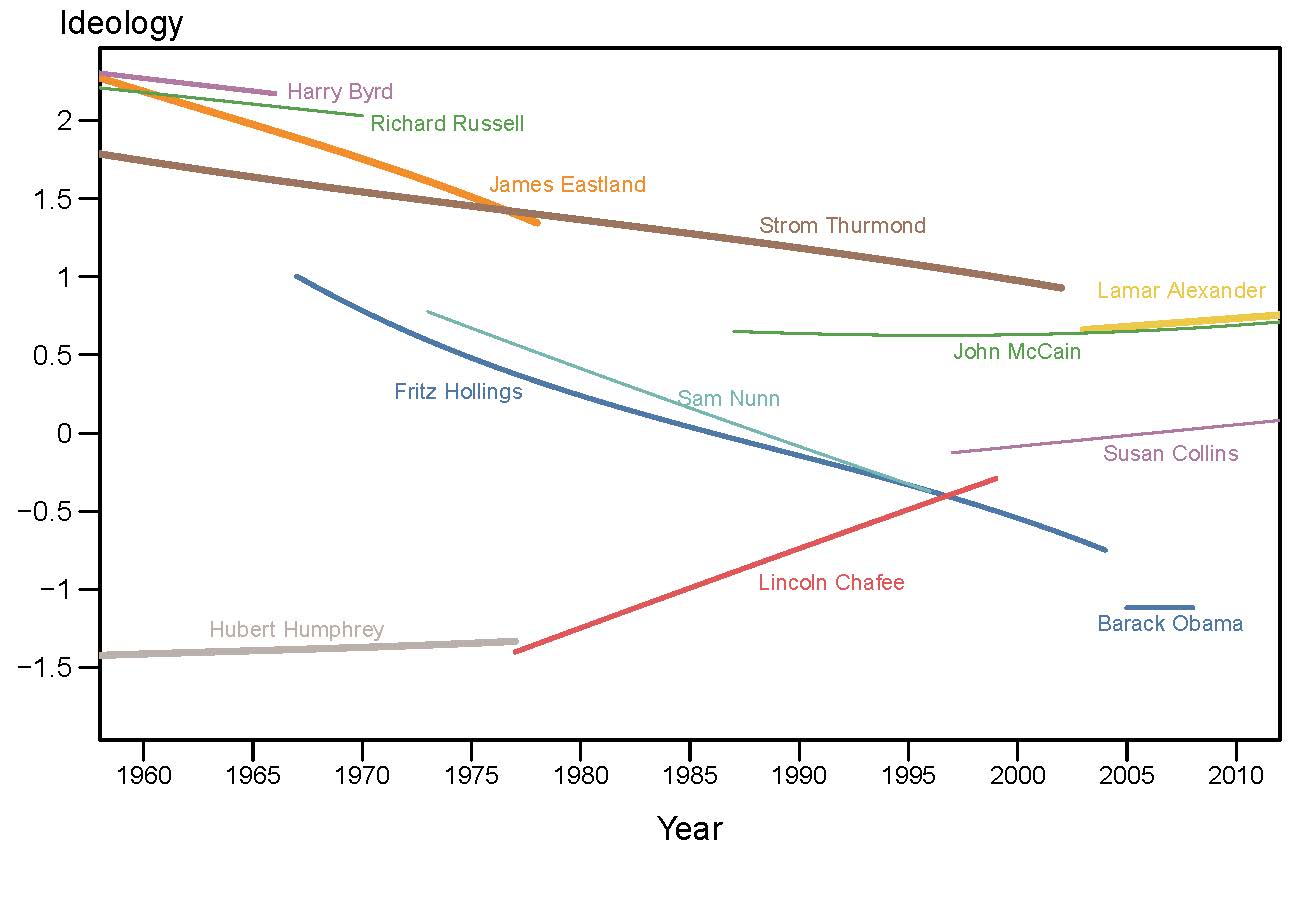 The Bridge Ideal Points seem to avoid some other issues that arise with the Nominate scores as well.  Obama is clearly to the left of McCain.  Moderate Democrats such as Hollings and Nunn started as conservative, but moved steadily to the left, a pattern consistent with their eventual support of the 1991 Civil Rights Act, for example.  Moderate Republicans like Chafee started quite liberal, but moved to the middle.

Are ideological preferences really one dimensional?

For Congress, we know that there was a very important second dimension in the early part of the period covered (from 1950 to roughly 1980).  After that, politics tended to converge to a single dimension.

As discussed above, using the Nominate first dimension for judicial politics from 1950 to 1980 is problematic.  The Bridge Ideal Point estimates are limited to cases and votes related to race, crime and culture issues for the entire period, meaning that the preferences reflect preferences on a relatively stable set of issues.

In the Supreme Court, one dimensional models are highly predictive of voting.  That is not to say preferences are perfectly one-dimensional.  Non-ideological factors matter (Bailey and Maltzman 2011) and Lauderdale and Clark (2012) have shown that preference alignments can vary across substantive legal issues.  Nonetheless, for many studies of inter-institutional judicial politics (about nominations or separation of powers theory, for example), a one dimensional characterization is reasonable given that Congress typically can often deal only with general ideological patterns.

Have the ideal point estimates changed since the 2011 release?

The data set has been expanded to include labor cases and some of the coding of specific bridge observations have been updated.

Generally the estimated ideal points in this release are similar to the 2011 release.  The largest differences are in the early era (Frankfurter, Vinson and Clark, for example).  Two factors should be kept in mind regarding these early ideal points.  First, the unidimensionality assumption may be less valid before the court came to focus much more on race, crime and culture after 1953.  Before 1953, issues before the court were more likely to involve labor and other issues for which the New Deal coalitions looked different than Warren Court divisions.  Second, there is much less information in these early eras, especially relative to Congress.  Therefore the scores before 1953 should be taken with more caution (which is true for Martin and Quinn scores as well).  For analyses in which the pre-1953 time period plays an important role, it may make sense to estimate preferences for specific issue of interest such as labor law based on a subset of data.